[Summary by wuxiaworld] Wang Lin is a very smart boy with loving parents. Although him and his parents are shunned by the rest of their relatives, his parents always held high hopes that he will one day become someone great. One day, Wang Lin suddenly gained the chance to walk the path of an immortal, but found that he only had mediocre talent at best. Watch Wang Lin as he breaks through his lack of talent and walks the path towards becoming a real immortal! [Summary by OSTNT] Saints, the most formidable beings under the heaven. Follow Tie Zhu as he entered one... Read more


[Summary by OSTNT] Legend told; there exist a single being who embraced death to kill the God. Before death, he managed to create three eyes that hold his immense power and was then thrown down to the world of humans. Read more


The world is long, the mulberry field is changing; sometimes life is endless and the days are endless. The meaning of the word ‘world’ in ‘Three Thousand Worlds’; in Sanskrit, the word ‘world’ is actually equivalent to the space behind what is now called three-dimensional space. Note that after that, it does not include three-dimensional and its former One two-dimensional space. An ordinary boy in a small town at the foot of a mountain was forced to embark on Xiuxian Road due to tragic changes. But it is difficult to cultivate immortals, and it is difficult to go to heaven!... Read more


A collection of one-shots by manga-ka Tamura Yumi.1) X-Day:4 short depictions of tragic misunderstandings and their consequences.2) 4nin no Onna:A very famous, rich, old hotel owner is found dead and when the police come to investigate, his long-time maid says that her master was killed by 4 women...3) Kanojo wa Dare wo Koroshitaka:A woman is found covered in blood walking through the streets of Tokyo. When questioned by a policeman, she utters that she has killed someone. To figure out what happened, the officer begins to read her intriguing diary...4) Hirotta Otoko:The five members of Maki's family are so picture... Read more


The curse of twelve stars, a girl who plays piano with a dream of becoming a chef, because of an odd job that she pretends to be a boy. What's waiting for Yue Hui is a mysterious mansion and 12 boys who have the curse of 12 stars which fall upon each of them. What's awaiting her? Where are her and the boys' destiny leading to? A love song for 1000 years, the legend of 12 beautiful stars, everything is in《Starry Night Club》 Read more


Adapted from a popular Chinese novel, protagonist Xia Xiao Xing was saved by Qin Jun who is the heir to the famous Qin Corporation. Due to pressure from his family to get married, he randomly picked a wife -- Xia Xiao Xing. Initially, he chose her only because she was pleasing to look at. But, when did it all change??? With the big difference in their social status, they have one rocky relationship ahead... Read more


Adapted from a popular Chinese novel, protagonist Xia Xiao Xing was saved by Qin Jun who is the heir to the famous Qin Corporation. Due to pressure from his family to get married, he randomly picked a wife -- Xia Xiao Xing. Initially, he chose her only because she was pleasing to look at. But, when did it all change??? With the big difference in their social status, they have one rocky relationship ahead... Read more


Throughout history, there existed an organization of seven people who were the bestowed will of the god of time and space, to reverse the death of those who die in an accident, so that they could fulfil their destiny. They are known as Xu Ming Shi. Read more


A collection of four dark Tamura Yumi oneshots from the early 1990s. In “X-DAY“, a giant zelkova tree stands watch over the misbegotten lives of the humans around it. In “Four Women“, an elderly servant describes the circumstances of her master’s death. Read more


2057. Hemisphere, a man-made city in Tokyo Bay, has wiped out virtually all crime by introducing the quantum AI system "XEVEC", through which the "law" acts as a physical force to protect all citizens. Hemisphere is a "utopia", an ultra-nomocratic society in which the righteous are rewarded and permanent peace is guaranteed. Or so I thought. Until that incident... Confronting crime in a near-future city! Physical court battles are now in session! Read more


The world is long, the mulberry field is changing; sometimes life is endless and the days are endless. The meaning of the word 'world' in 'Three Thousand Worlds'; in Sanskrit, the word 'world' is actually equivalent to the space behind what is now called three-dimensional space. Note that after that, it does not include three-dimensional and its former One two-dimensional space. An ordinary boy in a small town at the foot of a mountain was forced to embark on Xiuxian Road due to tragic changes. But it is difficult to cultivate immortals, and it is difficult to go to heaven!... Read more


Su Yanxi didn't think that one day she would marry the Demon CEO Gu xicheng in place of her elder sister. But what has been done is done. "Just make him fall in love with me after the marriage!" Read more


An ordinary and impulsive teenager gets x-ray vision after an accident. How will his life change? Money and power are at his fingertips. Let's see how he lives his new life without regard for anything and becomes a legend of the city! Read more


Amanogawa town, a peaceful country town but now it’s in crisis. Demons are attacking and are making people’s hearts filled with pain. Suddenly, a cute pretty girl dressed in a magical girl’s costume appears. However, But her true identity is a 88-year-old grandma! At the time demons attack, I will use my custom-made ’daikon radish’ (magic stick) combine with my own power to launch purify magic ......... ...... What are you grandma??..... With that magical girl look? The ultimate Gap Moe Magical Girl, who is pretty and can heal, is here! Read more

Xianzun System in the City Webtoon


Zhong Ma is an ordinary college student who is graduating but can't find a job. He unexpectedly learned that he was cheated by his girlfriend. He fell completely into the bottom of his life, and wanted to drink and drunk? !! I thought that my sad life would end like this, but was blessed by misfortunes, Zhong Ma gained an unlimited ability to upgrade the system, and started his open life! Perspective, teleportation, super fighting ... all at your fingertips! Since then, beautiful women gathered, no longer have to chase the goddess to be cheated, young man, counterattack! Read more


This world is filled with strange beasts called XENOBEAST, and mages who tamed them are called Beastmages. One day, one young aspiring beastmage is about to be late for her ride home to the capital. Read more


Watanuki Kimihiro is haunted by visions of ghosts and spirits. Seemingly by chance, he encounters a mysterious witch named Yûko, who claims she can help. In desperation, he accepts, but realizes that he's just been tricked into working for Yûko in order to pay off the cost of her services. Soon he's employed in her little shop- a job which turns out to be nothing like his previous work experience! Read more


A new story begins with Watanuki and Yuuko, while guests wishes are granted. Description by LuffyNoTomo Read more


Our protagonist Jo Cheul-Hee is a delinquent. He transfers to a new school, but what he doesn't know is that it's an all girls school. And now everybody thinks he is gay. Read more


Legend has it that on the last day of every year, demons and evil creatures would create havoc. People named this as "Nian". On one snowing day of this day, a pretty young man with long silky hair picked up an abandoned baby and named her as "Xue". 15 years later, Xue has grown up to be a young lady. One day, a young man appeared and told Xue with a gentle voice that could melt the coldest ice, "I've been searching for you.. for so long.." Read more


Four years ago, a large scale disaster in Tokyo claimed two million lives. The remaining thirteen districts of the city were isolated into the Tokyo Barricade Zone. Morisaki Harumi, an unruly kid with great fighting strength, is his family's sole survivor from the incident. One day, in a traffic accident, Haru gets pulled into a world of violence and meets Mana, the girl who turned herself into an ancient sword. Read more


From Viz: Kamui Shiro is a young man who was born with the power to decide the fate of the Earth itself--a destiny he can barely bring himself to believe. But as other players in the prophesy begin to gather around him--the "Seven Seals," with the power to protect the Earth, and the "Seven Harbingers," who are fated to destroy it--he has no choice but to come to terms with his fate. -ON HIATUS- Read more


Kaphisilia Ailide is the daughter of a noble duke. Ever since the disappearance of her elder brother, her parents have put all their pressure on her. Everyday she has to have sword fighting and etiquette class. Days before her father's birthday, she went to a forest of her family's confer territory to get him a present. All of the sudden a death wolf leaped out and tried to kill her. And then this strange guy... Read more


[From OSTNT] Due to an incident, two vowed-siblings entered opposite factions. What will fate bring the two? Original Webcomic: http://ac.qq.com/Comic/comicInfo/id/531614 Read more


The type of boy Kumi hates most is the kind who's pushy and flighty. When she rejects such a boy, he forcibly steals her first kiss, and at that embarrassing moment it is Miyazawa Takafumi from her class who captures it on film. Takafumi, Japan's #1 school age photographer, tells her that if she wants the film she'll become his model for a photo contest. He acts like the kind of boy Kumi normally hates, and since her awful first kiss she hates kissing, but Takafumi's kisses leave a different kind of mark... [Taken from from Shoujo Magic] Read more


A scholar with absolutely no desire to study met a mysterious girl called 'Miss Ugly' who had no memories of her past. She resigned to fate that she was destined to be sacrificed to the Huang Deity, but the scholar was determined to save her. Read more 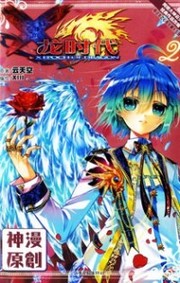